Sometimes it is not love at first sight! You just need a little more time to realise you are in love. That’s exactly what happened with us in Lisbon. We spent four lovely days here during our trip to Portugal in November 2017. Nothing ‘wowed’ us on our first day but by the end of the 4th day we literally had to drag ourselves to the airport. That’s Lisbon for you– nothing fancy, no drama but full of charm, great vibes and a certain inexplicable ‘homely’ feeling. Are you also planning a city break? Read on to find out why Lisbon has to be on your bucket list!

We took Turkish Airlines from Singapore and arrived by noon time at the cozy Magnolia Guesthouse. It was pretty easy to get here as the we took Aerobus from right outside the airport. There are two lines-1&2 which provide transfer from the airport to important locations/hotels in the city and the ticket counters are located next to the bus stops. We got down at Marques de Pombal which cost us less than 5 euros per person. From there we had to walk another 5 min. Now, 5 min is nothing but please bear in mind that Lisbon is the city of seven hills with cobblestoned streets. Walking uphill with luggage can be quite a task! So travel light and wear comfortable shoes.

Day 1: We found out the best way to explore Lisbon is by walking on those beautiful cobblestone streets and getting lost in the alleys. So this is exactly what we did on our day 1. After freshening up at the guesthouse, we had a nice and affordable lunch at Rodas. From there started walking along Principe Real all the way to the Tagus River to watch the sunset crossing Chiado and Baixa on the way.

Since Lisbon is a hilly city, there are several vantage points called Miradouros in Portuguese which provide great views. We crossed Miradouro de São Pedro de Alcântara just before the downhill walk to the river. We spent sometime there not just for the pretty view but also for the peppy live music. 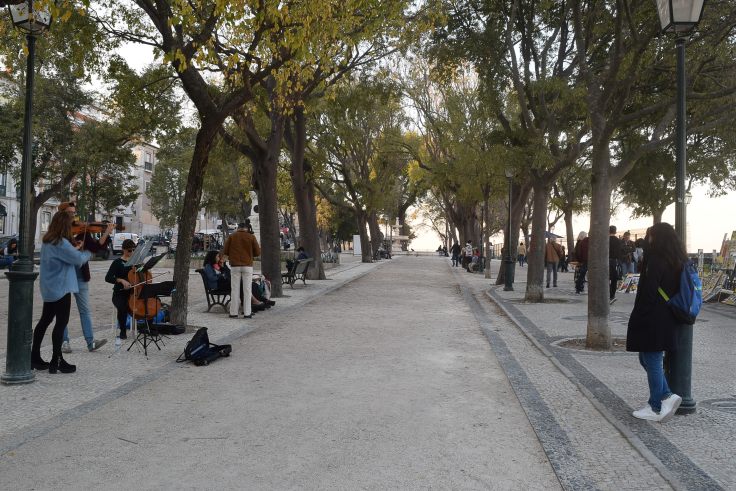 After the sunset, we tried out the famous Pasteis de Natas or Portuguese egg custard tarts at Manteigaria along with coffee. Manteigaria’s Pasteis De Nata has been winning several competitions and I enjoyed the delicious, thin, and flaky pastry. The oldest (and most popular) in this business is Pasteis de Belem and they also own the trademark for the name of the pastry (no other pastry shop/cafe can call their tarts- Pasteis De Belem). You need to try both in order to decide which one is better!

Overall, it was a good day, nothing out of the ordinary. In hindsight I know what was bugging me- the cigarette butts stuck on those beautiful cobblestone streets. Seriously, why can’t people have basis sense of their surroundings!!

After our first night in Lisbon, we went to explore Lagos and Porto. From Porto, we arrived back in Lisbon and spent three more days exploring the city. We booked this cute AirBnB located in the heart of Alfama. Alfama is one of the oldest districts in Lisbon with ancient houses and narrow cobblestone streets. It was a very charming neighbourhood and I found myself stopping every 5 min just to absorb the beauty of it. Alfama was also the birthplace of Fado, a traditional form of Portuguese music. We had a wonderful 3 course dinner at Casa Linhares while enjoying a soulful Fado show. This particular restaurant was a Count’s palace earlier which got ruined during the 1755 earthquake. Prominent singers perform here and it is very popular with the locals.

Day 2: It was a beautiful, sunny day and we started it right by having breakfast at Pasteis De Belem. My verdict for Manteigaria vs Pasteis De Belem was tipped in favour of the latter as their custard has the right amount of sweetness for me. I also liked their other pastries and chicken puff.

We walked to Jeronimos Monastery, a UNESCO world heritage site, and spent a good couple of hours there. Its a very impressive complex consisting of museums and a Church (which houses the tomb of star navigator Vasco Da Gama) with its ornate, Gothic style architecture.

Interestingly, King Manuel I built it in 1502 on the site of a hermitage founded by Prince Henry the Navigator, where Vasco da Gama and his crew spent their last night in Portugal in prayer before leaving for India. It was built to commemorate Vasco Da Gama’s voyage and to give thanks to the Virgin Mary for its success. The Church has free entry but monastery and museums need an entry ticket (12 EUR per person which includes Monastery as well as Museums).

From the Monastery, we walked to the Belem Tower (also a UNESCO world heritage site) which served as a defence system near the mouth of the Tagus river. On a sunny day, it looks white and can be quite a sight against the blue of the river. We didn’t go inside as we came to know there is nothing much to see there!

Our next stop was Padrao dos Descobrimentos or the discovery monument dedicated to the great sailors and explorers of the Age of Discovery. Beautiful carved figures on this monument, in the shape of a ship from the side, depict Henry the Navigator, Vasco Da Gama and Ferdinand Magellan amongst other prominent navigators of that era. There is a museum inside and viewing platform on top of the 52 metre monument which you can access after paying 4 EUR.  We didn’t go inside but spent some time admiring the mosaic map of Medieval World in front of the monument.

Christian Cross from the front!

We wanted to take a break so we went to Miradouro de Santa Catarina. This one is very popular with the hippies and don’t be surprised if you are offered drugs on your way up to the viewpoint. Overall, good view but I didn’t like the atmosphere. There is a statue of Adamstor, a mythological monster, to depict the challenges faced by explorers while sailing in the seas. 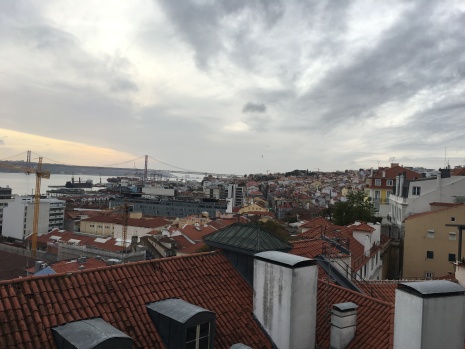 From the Miradouro, we walked to the exquisite Igreja de São Roque. Though it looks austere from outside,  it is filled with gorgeous pantings and gold-adorned walls.

Last stop of the day was, Rua Augusta Arch, a triumphal arc built to commemorate the rebuilding of Lisbon after 1755 earthquake. Right outside the Arch, towards the river, is one the largest squares in Europe, Praca Do Comercio or Comercio Square. Loved this area–you can walk around, sit in cafes on the sides, walk all the way to Tagus river or just admire King Jose’s statue on his horse in the centre!

We ended the day with a lovely meal at Restaurante MOMA with some Ginjinha or cherry liqueur.

Day 3: We started our day early as we had set aside this day for Sintra. We first went to Portas Do Sol viewpoint (within 5-7 minutes of our studio) and then to Miradouro De Santa Luzia. Santa Luzia is a great viewpoint with Alfama’s orange roof tops and the blue waters beyond. It was also quiet at this time, so I enjoyed the crowd-less views (hate the cruise ship though!).

We then picked up some Pasteis de Natas from the pastry shop right in front and ate those while walking towards Rua Augusta Arch since I wanted to see the Arch and Comercio Square in daylight!

We wanted to visit Se Cathedral (also known as Lisbon Cathedral- the oldest Church in the city!) but it was closed so we visited Saint Antonio Church instead. 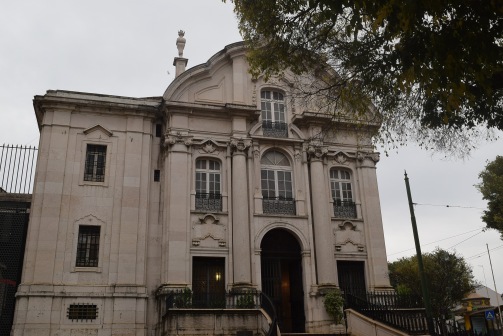 I had been dreaming about Sintra ever since we booked our Portugal trip- pretty houses or quintas, palaces and those gorgeous fall colours! Unfortunately, I booked a trip with We Hate Tourism Tours. I wish I had looked at their itinerary carefully since they don’t go to Pena Palace! Anyways, it gives me a reason to come to Lisbon and Sintra again soon. We were picked up by our very friendly guide Anna in her van. We didn’t like the tour much but Sintra and Cascais were beautiful. Like straight out of a fairytale with their castles, palaces and pretty houses. In Sintra, we visited the Monserrate Palace which is a beautiful one with Islamic influences and huge garden outside. The palace was undergoing some renovation and I am sure it will be much more impressive once that is done.  On the way to Cascais, we went to Cabo Da Roca which is the westernmost point of continental Europe- you can see dramatic cliffs here and the vastness of Atlantic Ocean. It was a foggy day so the view was not very clear but it was still very beautiful. The drive to Cascais along the ocean is a very scenic one as well. Cascais is a coastal town near Lisbon and is quite popular for surfing and weekend getaways especially with celebrities. We explored the town centre on foot and some really good gelato at Santini’s (must do!). We drove back to Miradouro de Santa Catarina to see the sunset while having some home-made Ginjinha (better than Moma’s).

We still had some time before dinner, so decided to check out the views from Santa Justa.Santa Justa is a more than 100 year old elevator near the Carmo Square that connects the lower streets of Baixa to the upper street of Carmo (Lisbon is a hilly city!) and has now become more of a tourist trap. There is a viewing deck at the top that provides a 360 degree view of the surrounding area- Rossio square, Sao Jorge castle, Tagus and the Church amongst other landmarks. The queue was pretty long and it was completely dark by the time we reached up but it was nice and breezy and the view at night wasn’t too bad either!

We ended the day with an amazing dinner at da Prata 52. It was one of my favourite meals of the trip.

Day 4: Sadly, our time at Lisbon was coming to an end. We were leaving in the evening and we had only half a day. So we checked out and stored our luggage at Santa Apolonia train station. We then went to Sao Jorge Castle, a Moorish Castle built on the top of a hill in the 11th century. Due to the elevation and the location, I thought this one has the best views in Lisbon. Touring the castle can easily take about 1-2 hours and the fare is 8.5 EUR per person. Right before the entrance is a small garden full of peacocks and peahens!.

From the castle, we walked to Martim Moniz to take a ride on the historic Tram 28 all the way to Rossio square. There was a long queue and wish we had boarded from some other bus stop because Martim Moniz is the first stop and all tourists come here to get a seat. We were quite ok standing at the back (was more fun!) and thankfully could skip part of the queue. Still, we waited 40-50 minutes! My advice would be to avoid Martim Moniz and just board the tram at any other stop. Tram 28 has also become a tourist trap (beware of pickpockets) but I quite enjoyed the ride. It was like getting transported to another era! We picked up some goodies at pastry shops to eat on our way back to the airport.

Food in Lisbon is pretty nice and affordable especially good for people who like seafood and pork. We loved having the fresh grilled fish, prawns and octopus during the trip.

We had a great time in Lisbon even though we were sort of underwhelmed on Day 1. But then Lisbon just grows on you and now we can’t wait to come back and spend more time here.

8 thoughts on “Lisbon Love Affair: 4 days in the Portuguese capital”