Glittering casinos are the first things that pop up in your mind when thinking of Macau. However, this island has a lot more to offer in terms of culture and gastronomic experience. I was on my first solo trip to Macau and ‘Culture and Food Trip’ is how I would describe it (my friends laugh every time I say this). If you are looking for an itinerary beyond casinos, read on!

How to reach: There are several ways to reach Macau from Hong Kong: via the longest sea bridge in the world, helicopter and the good old ferry. The ferry terminal is at Sheung Wan. I chose to go via ferry and bought the tickets off the counter a few days in advance to avoid last minute hassles of the National Day long weekend. There are two ferry companies i.e. TurboJet and Cotai Water Jets and the ferry takes about an hour to reach. If you are staying at the Cotai Strip (where all casinos are located) then take the ferry to Taipa otherwise the ferry to the main terminal is your best bet.

Visa: For Indian passports, visa is not required. You will simply need an arrival and departure stamp on your passport.

Where to stay: Macau is quite small and you cant really go wrong with the location. I stayed at Grand Lapa and the location was quite convenient. The free shuttle service to various hotels in Taipa from Sands Hotel (right next door) was superb.

I checked into the hotel and went food hunting. Macau has its own cuisine which is an interesting mix of Portuguese and Chinese cooking resulting in ‘Macanese’ cuisine. I decided to try Porto Exterior and ordered a fish stew and Serradura. It was a nice hearty meal and I was all pumped (and well fed) for today’s sightseeing. You can easily get around using taxi; just make sure you have cash either in Macanese Pataca or Hong Kong dollar. Hong Kong dollar is widely accepted in Macau and for hotels and restaurants you can use cards pretty easily. I also explored the Fisherman’s wharf post lunch which is nothing but a shopping plus entertainment centre made to look like ancient Rome so you can totally give it a miss. 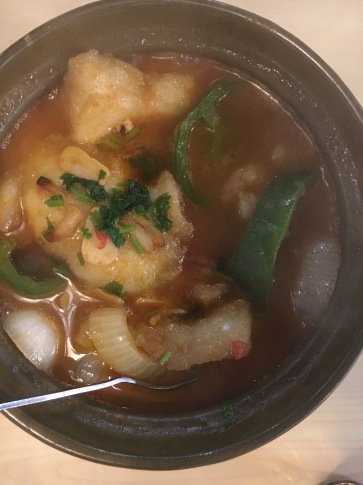 I took a taxi from the hotel lobby to Senado Square. Like every European city, Macau has its own version of the town square given its history as a Portuguese colony untill 1999. The historic centre of Macau is a UNESCO World Heritage Site. The architecture is quite nice, churches are beautiful and the streets are cobblestoned! I walked all the way to St. Paul’s ruins and then climbed the hill to watch the sunset from Monte Fort. St. Paul’s ruins are probably Macau’s most popular and photographed spots. The church was destroyed by a fire and only the facade remains now. 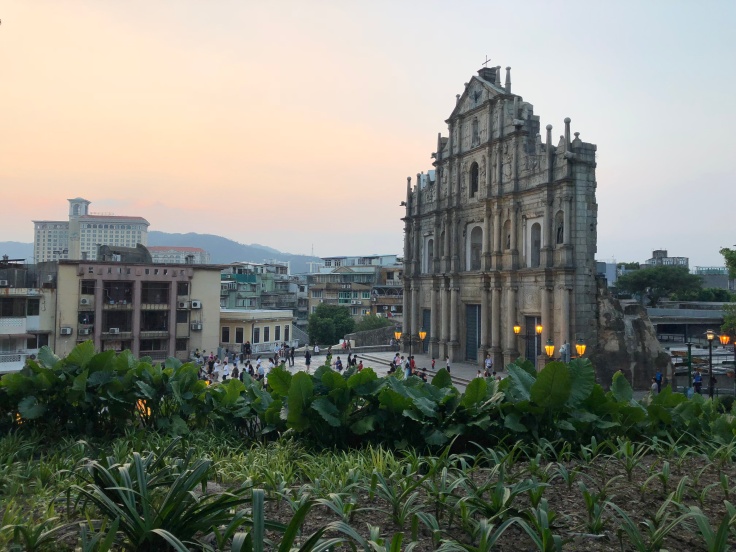 I had booked the evening show of the House of Dancing Water. I was totally mesmerised and spellbound by the performance. It is unlike anything I have seen before and would highly recommend it. I had a quick dinner of burger and orange juice at Shelter Cafe, City of Dreams and took the shuttle back to Sands.

Day 2: I spent the entire day admiring Macau’s hidden gems and savouring its delicious food. First stop was A-Ma temple followed by lunch at Casa do Porco Preto. Food was average and expensive so wont recommend it.

A-Ma temple is the oldest Taoist temple in Macau dedicated to the patron goddess of seafarers and fishermen. Seems logical given Macau is a port city! From there I took a walking tour of some historic buildings–

I went back to my favourite spot atop the hill for sunset and found some pretty alleys near St. Paul’s ruins. I ended the day with a lovely dinner at Mariazinha–loved the soup, croquettes and sauteed shrimps. 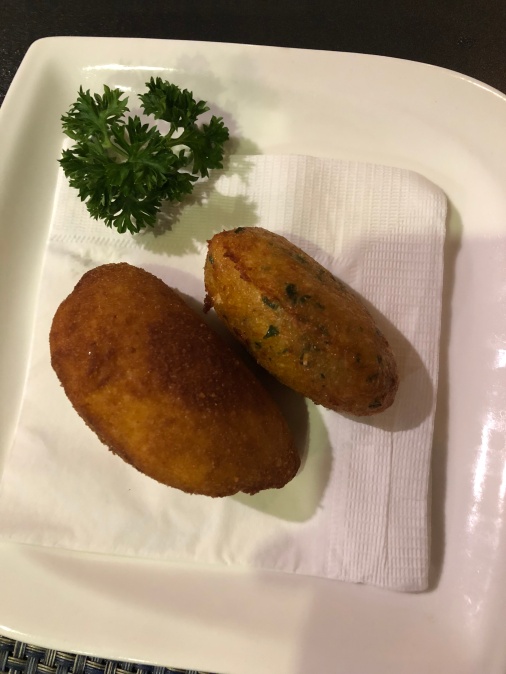 Day 3: I took the shuttle to Venetian to spend some time at the Taipa village. I decided I will take a quick tour of Venetian and then head to Taipa but the detour took a bit longer than I anticipated. The interiors are gorgeous and modelled to look like Venice with the canals, beautiful bridges and with a ceiling of dreamy clouds. A Chinese girl wanted a selfie with me and I happily obliged. I noticed the casinos were crazy crowded due to National day holiday in HK and China– there were long queues at the slot machines! Imagine queuing up to lose money. 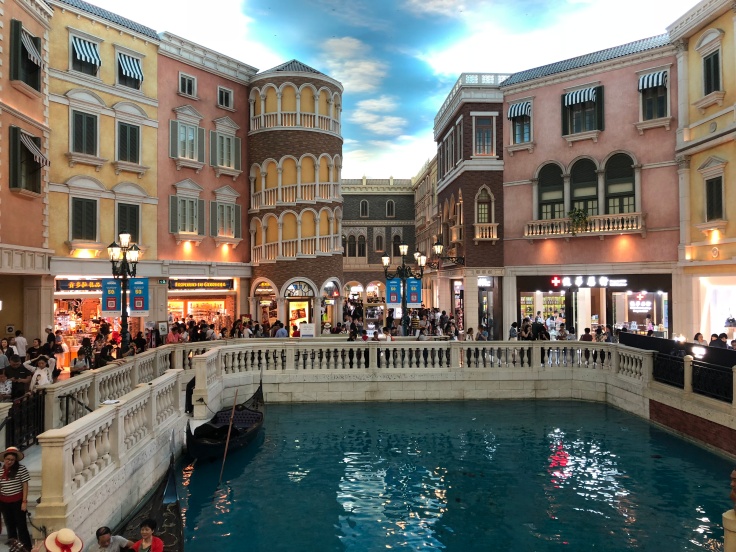 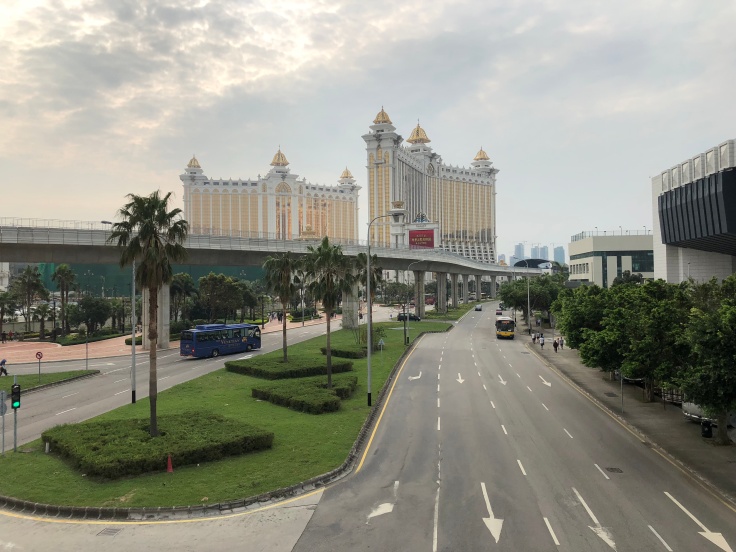 It is very interesting how you have these glittering casinos on one side and the cutesy Taipa village on the other side. The village itself is lovely with its pastel hued houses and charming alleys. Lots of delicacies being sold here along– the famous Lord Stow’s Portuguese egg tarts, pork chop buns and delicious coffee. The Taipa houses museum is a collections of traditional Taipa houses giving a flavour of Macanese life in olden days. 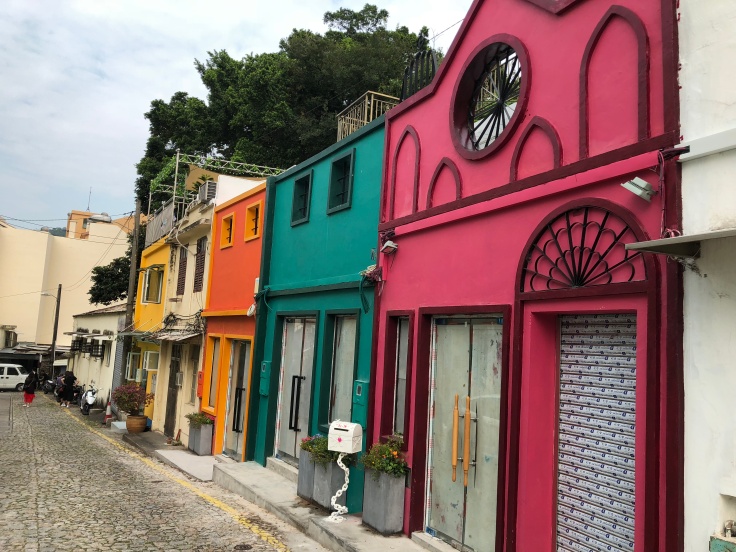 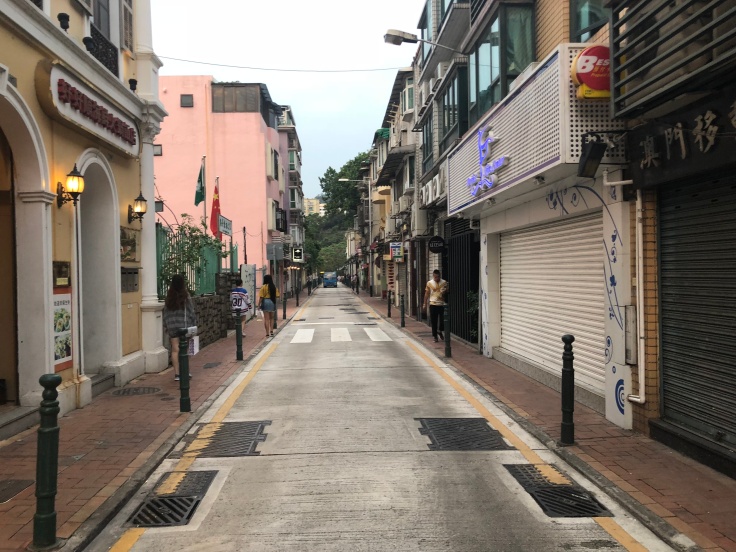 Today was reserved for trying Macau’s national dish i.e. African chicken and thats exactly what I did at Cafe Litoral. The African Chicken was yum- a bit sweet and hit of chilli, a very interesting dish.

I went back to the hotel to get my bags and chose a nice (and less crowded) spot along Avenida De Sagres to watch the finale of Macau’s annual fireworks contest. An international contest, the finale typically coincides with the National Day. There were two fireworks–one from the Italian team and the final one from Chinese team. A very spectacular set of fireworks and perfect end to my first solo trip ever!! 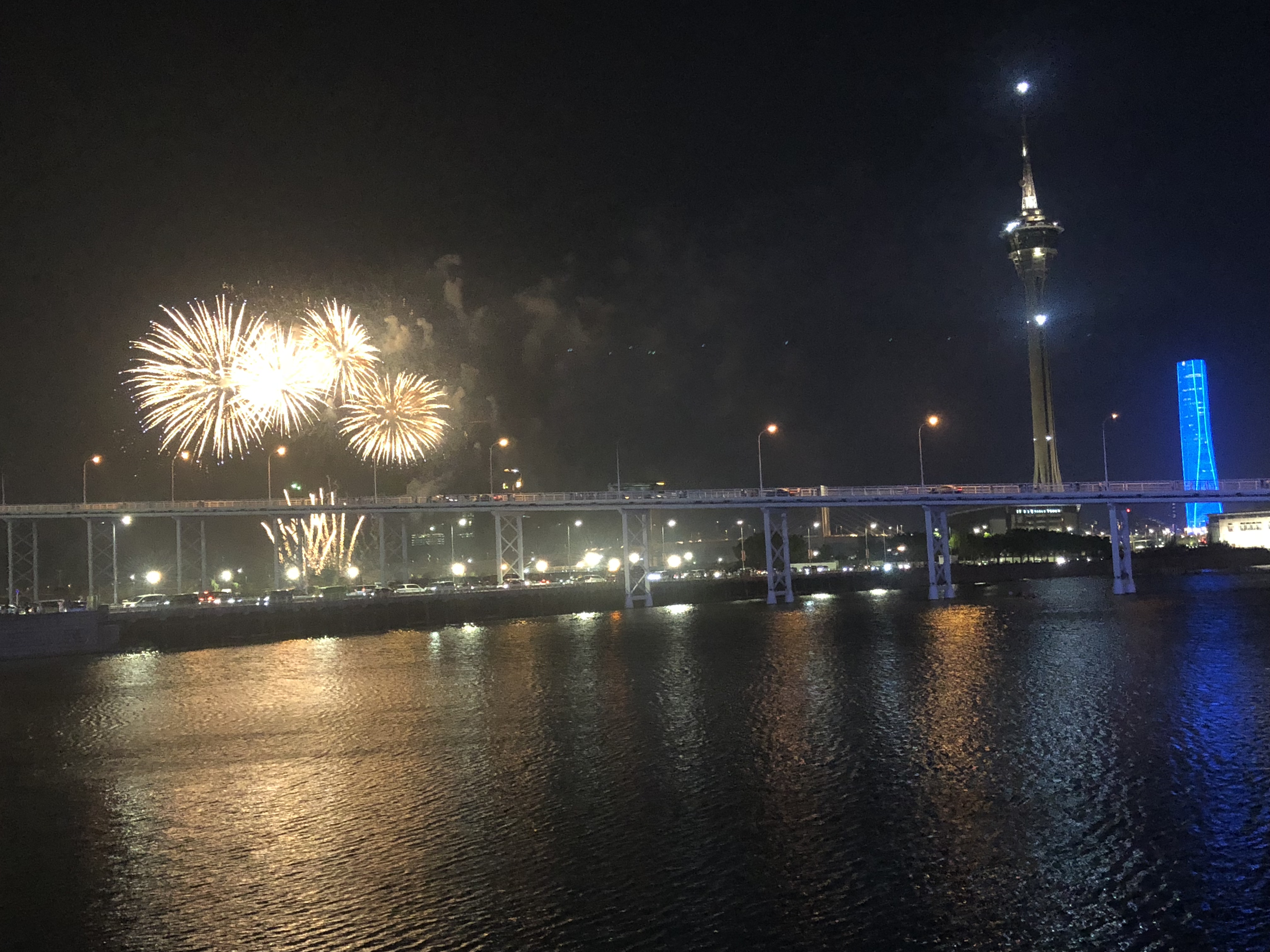 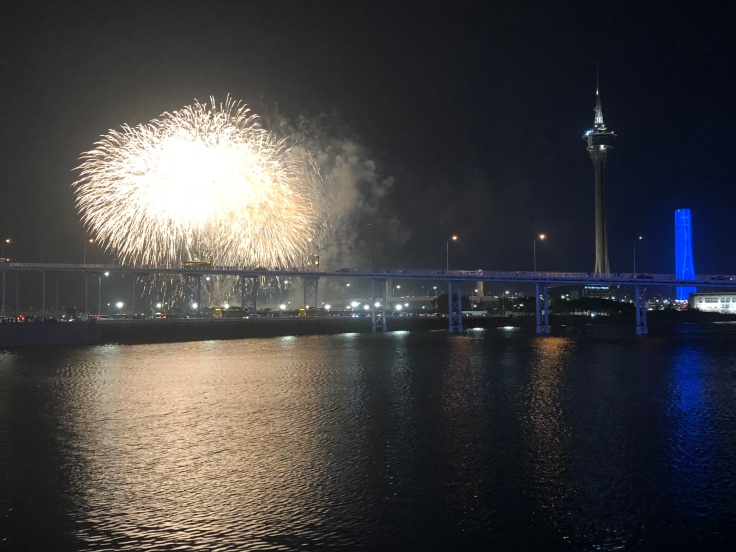