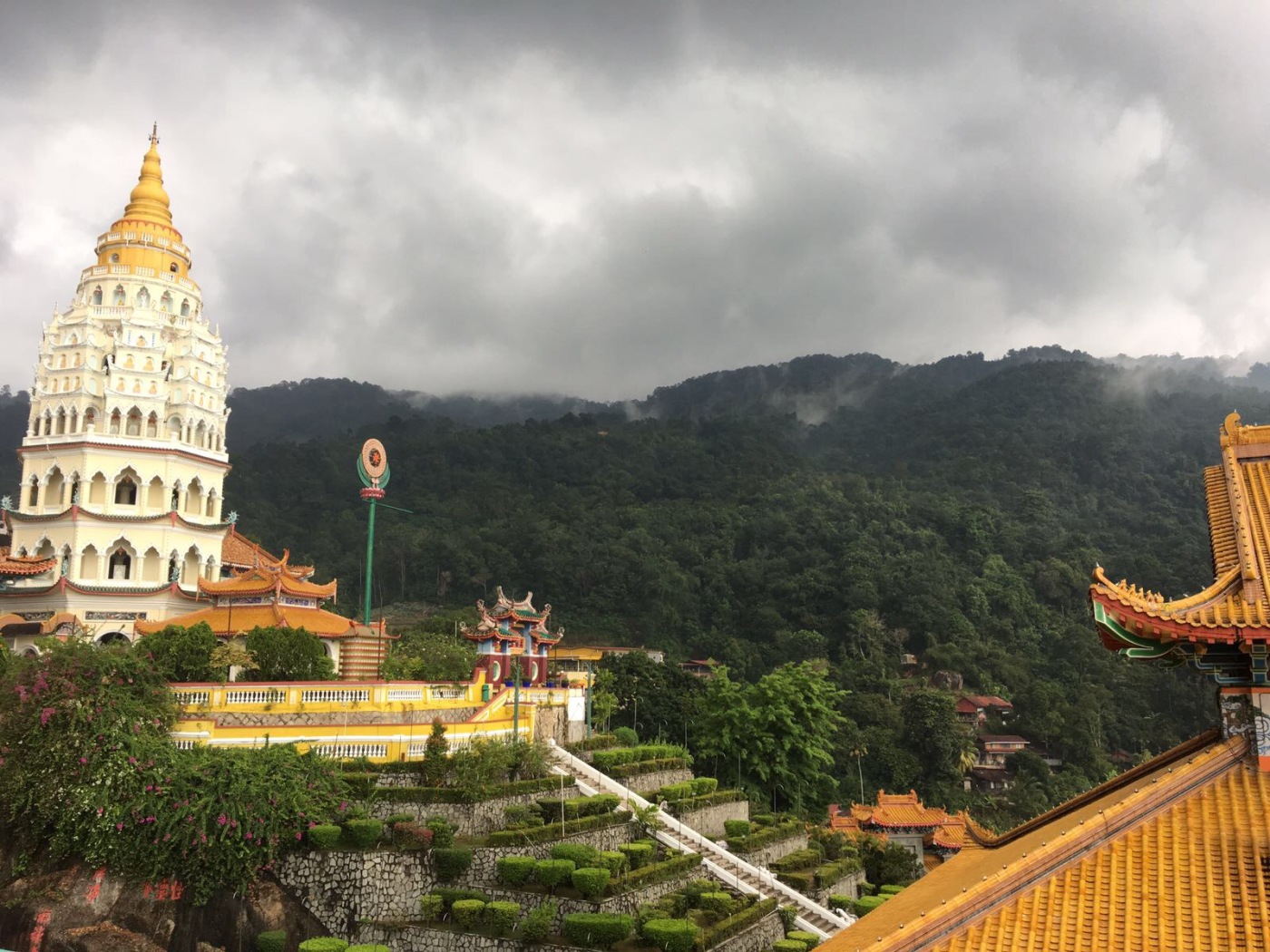 With a trip to Penang, Malaysia I have completed a tour of cities which were part of the British Straits Settlement! The other two being Singapore and Malacca. Penang, also called Pearl of the Orient, is located on the north west coast of Malaysia and is renowned for being the culinary capital of the South-East Asian country. It consists of Penang Island, a narrow strip of the Malay Peninsula and a handful of smaller islets, with the capital, Georgetown, being located on Penang Island.

Penang has lots to offer- some of the cheapest and most delicious street food in the world, a street art trail that will take you to the deepest corners of the island, old colonial buildings, Peranakan mansions and centuries old Chinese temples with sprawling hills forming the backdrop. It is one of the most developed cities in the country but hasn’t lost its old world charm. Various ethnicities (Malays, Chinese, Indians, Expatriates) coexist in this thriving city thus shaping its eclectic culture.

How to get there: From Singapore, it is only 60 minutes away by flight. There are multiple flights everyday including the low cost carriers like Scoot, AirAsia etc.

Where to stay: Georgetown is the place to be in order make the most of your trip. Most tourist attractions, street art and food is located in Georgetown which is a UNESCO world heritage site. I prefer staying in apartments when travelling with family so I booked a studio for my stay at Mansion One. The higher floor apartments provide a great view of the sea and the island. The location is also quite good so overall great value for money. 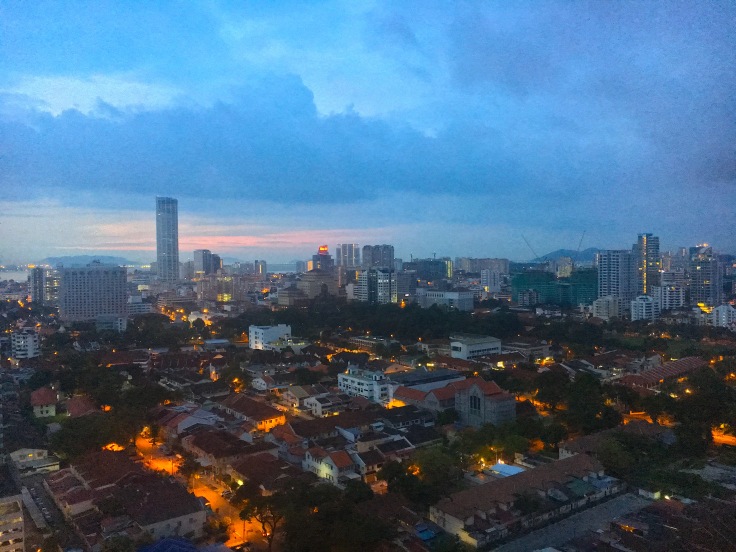 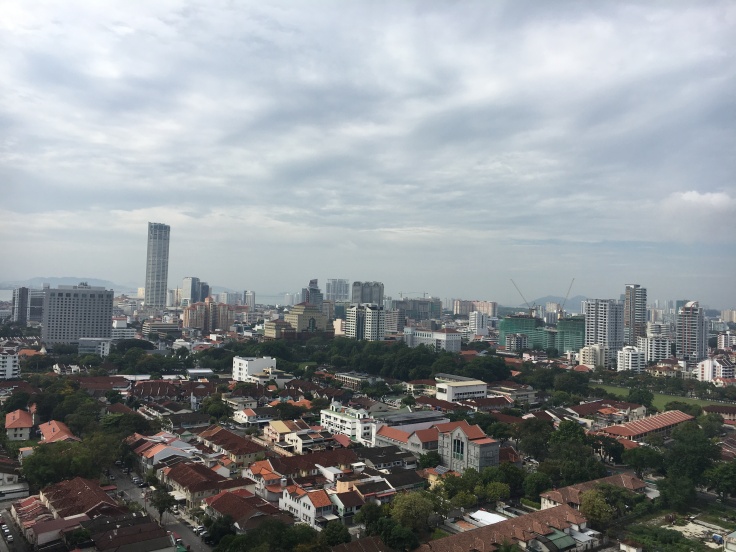 How to get around: We used Grab taxi all the time and it was very convenient. The rates are also reasonable. In fact, there was some promotion going on and we paid nothing for most of the short distance trips. Though my friends have told me getting a taxi from certain locations late in the night can be tricky. You can also use the public bus service!

Things to do: I felt Penang has something for everyone. Foodies, art lovers, nature lovers, activity seekers, history buffs- they have got everything covered. My ‘must do’ list (not in that order) :

I took the evening flight from Singapore to Penang. Upon arrival, we put our luggage in the apartment and headed to Gurney Plaza for dinner. Most places were about to close for the day. We finally ate croissant at Winter Warmers and it was pretty decent.

Day 1: This one was a rainy day! We had an amazing dim sum brunch at Tai Tong. This was one of my favourite meals of the trip so you can’t go to Penang and not eat atleast one meal here.

In the evening, once it stopped raining, we headed to Kek Lok Si temple. It is perched at the base of a mountain and provides pretty awesome views of the island. It was so peaceful, I could have easily spent 2 hours here just wandering inside the temple complex. Unfortunately we reached there near to the closing time. Also, it started raining quite heavily. 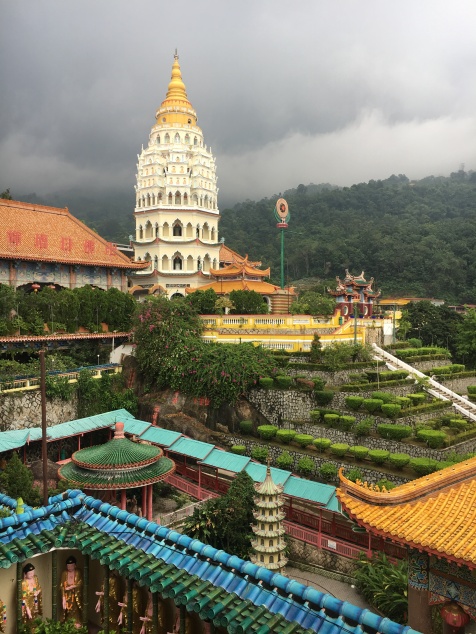 For dinner, we had tried the chicken, mutton and almond soups at Sup Hameed. Quite enjoyed the delicious soups in the rainy weather.

We next headed to Nasi Kandar Line Clear where we tried their nasi kandar, roti canai, coffee and iced milo. The food was okay in my view. I expected more since it features as ‘one of the best’ Nasi Kandar places in Penang. 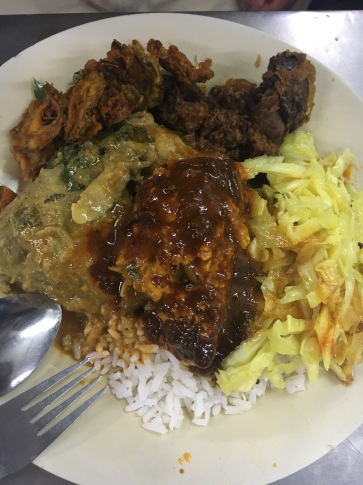 Day 2: Our day started at Penang hill. It was quite crowded as it was a Sunday. You can buy tickets online for the tram here (you need to book atleast 24 hours in advance in case you are booking online) or you can buy on the spot. On the spot, there are two kinds of tickets- normal and VIP/fast lane. VIP tickets are more expensive but worth the extra money if it is too crowded. Also, the VIP ticket holders get to board the tram first so they can get a seat while the normal ticket holders board later and have to stand during the journey. It is a short, stable ride so standing is not an issue at all. The fares for citizens and foreigners are different as well. We bought the VIP tickets on the spot.

The views from up the hill were quite spectacular despite the fact that the day had started out as sunny but became cloudy as we reached up.

We had breakfast at David Brown’s- pretty decent but a tad overpriced which was expected.

We also took a buggy car ride which shows you around. There isn’t a lot to do up there- there is an owl museum, a mosque, a temple, some other activities for kids etc. The highlight for me was the funicular and the views!

In the evening, we first had the Penang road famous teochew chendul which was yum! The easiest way to spot the original one is to look for the street art depicting a boy having Chendol. This stall is right below that street art.

We then walked through Armenian street to see some more street art (while parents did the same on a trishaw). More on Penang’s famous street art here.

We walked all the way to Chew jetty. It was interesting to see how people still live in these houses on stilts. Make sure you respect their privacy. There are little shops all the way till the end. At the end is the pier and a Chinese temple. We just sat there for a bit to enjoy the cool breeze.

The dinner on this day was the highlight of our street food adventures. We headed to Chulia street for the famous Wantan Mee. Its an unnamed stall but easily recognisable from the long queues. There are various popular stalls in that same vicinity. We also has popiah, char kway teow, Pandan muah chee and Apom. Everything was amazing but my favourite was the wantan mee. It was hands down the best wantan mee I have ever had. We had cold dessert soup at Lebuh Kimberley and loved it. This was the first time i had white fungus!! 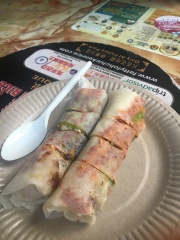 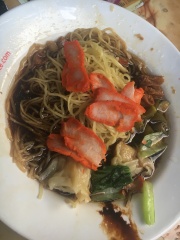 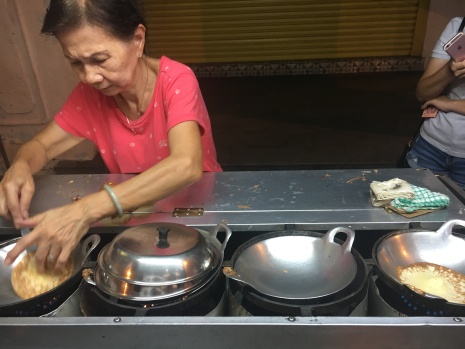 Day 3: We had a late night flight this day so after checking out we had breakfast at Starbucks downstairs. We then bought Penang’s famous biscuits from Him Heang (they are best in town!). Their signature Tambun biscuit with green bean paste filling was the best.

We next went to Penang Peranakan mansion which has an entry fee of RM21.2. This includes a group guided tour of the museum. I have been to the Baba-Nyonya museum in Malacca and this one was pretty similar though more lavish (since it belonged to a wealthy business tycoon).

We had our last meal in Penang at Mews cafe and absolutely loved the food. We ordered some chicken Satay, fresh spring rolls, Curry Mee, Sayur Lodeh with prawns (coconut based soup), sago with gula melaka and cake with ice cream. It was delicious, local food with such depth of flavours- Highly recommended! 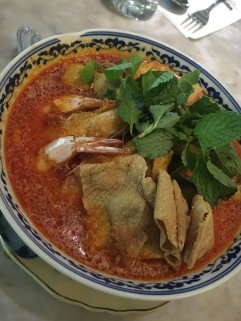 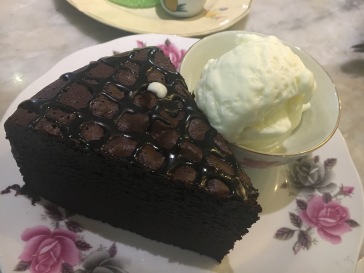 We wandered around Jalan Muntri and Lebuh Chulia to spot some more street art and then headed to the airport!

We had a super fun getaway in Penang and I actually can’t wait to be back here. By the way, Penang consistently features in the list of top destinations for retirement!